Several million scrap refrigerator units are disposed of every year in Germany alone. The proportion of refrigeration units recycled by volume totals about 40% and is the most significant segment after consumer electronics.

One particular challenge in this recycling process is presented by chlorofluorocarbons such as R 11, R 12 or R 141b, which were used for decades as foaming agents for insulation materials. Since these substances damage the Earth’s ozone layer when released, they must be removed and collected securely in a closed-system pre-processing plant.

The fact that pre-processing of legacy refrigeration units always needs to be carried out in accordance with the latest technological standards means that plant operators gain a decisive advantage when working with an innovative and experienced plant manufacturer.

If you are responsible for the safe handling of refrigerators in the recycling process, you need a reliable and innovative partner at your side.

With our systems, you have the security of the most up-to-date and technologically leading solutions even in demanding and safety-sensitive sector of refrigerator recycling.

Our ERDWICH plants have already processed more than 30 million refrigerators and are therefore the best example of our expertise in cooling appliance recycling.

The benefits of an Erdwich system: 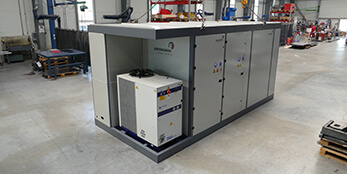 How does recycling of refrigeration devices work?

The entire recycling process is continuously monitored by a process control system developed in-house. All operating conditions can thus be continuously checked for compliance with limiting values and documented.

The individual steps of the refrigerating device treatment process:

Preparation: By means of manual removal, all loose parts such as cables, food containers and glass, and also food residues, are removed. Harmful substances, such as mercury switches in freezers, are also removed by hand.

Stage 1 - Extraction |Cooling circuit: In order to avoid environmental hazards, the coolant mixture present in the cooling circuit is now extracted in the first treatment stage. The cooling circuit is pierced with special piercing tongs and the various VHC/VFC refrigerants, such as R12, R22, R134a, R290, R407a, R410c, and R600a, as well as the refrigerant oil, are extracted from the cooling circuit so that these substances can then be thermally separated in the ERDWICH extraction system and then disposed of properly in suitable containers. The extraction takes place in an airtight manner and by means of a vacuum system. The refrigerant/oil mixture flows into a separation unit in which the VHC/VFC components are separated (boiled out) from the oil. After this degassing process, the cleaned waste oil is filled into containers and finally given to specialised companies for further processing. The recovered refrigerants are fed into a pressure-resistant large container. Subsequently, the compressor is separated from the refrigerating device body by means of hydraulic shears and can be disposed of. After the compressors have been removed, the refrigerating devices are conveyed forward to the entry gate of the shredder mechanism. As part of the residual oil removal process, a hole is bored in the separated compressors and the compressors are emptied of residual oil. The refrigerant/oil mixtures obtained in the process are also extracted and thermally treated in the extraction system so that a residual VHC/VFC content of 0.1% can be safely maintained.

Stage 2 - Shredding | Fraction separation & extraction of pollutants: In the second treatment stage, the refrigerating devices are shredded (pre- and post-shredding) and processed so that the solid fractions of iron, aluminium, copper and other residual materials (mainly plastics) can be separated from each other. The materials separated and processed in this way are passed on as secondary raw materials to further recyclers for new production and recycling. The separation of the recyclable fractions takes place with simultaneous collection of the entire process air, since the propellants bound in the insulating foams are released during the shredding process. The PUR foams are broken down by means of special shredders in order to destroy the pore structure and to achieve maximum degassing of the foaming agent (VHCs/VFCs) contained in the foam. In order to remove all residues from the process air, it is first collected by suction pipes and then freed of dust particles by fabric filters. Then the humidity is removed from the dust-free exhaust air. In principle, two different technologies are available for removing CFCs from the air: On the one hand, it is possible to freeze or condense the gases contained in the process air by means of low-temperature condensation. On the other hand, it is possible to clean the air flow adsorptively with activated carbon.

How should a refrigerator be disposed of?

Modern refrigerators and freezers can usually be operated with far less energy than old devices and since 1995 also contain more environmentally friendly refrigerants than the older models. However, it is imperative that the old devices that have been taken out of service be disposed of properly. The chlorofluorocarbons (CFCs, or VFCs) contained in the old refrigerators are harmful to the environment and the ozone layer when they are released. In addition, CFCs - also known to be greenhouse gases - contribute to global warming (glacier melt). Since 1995, modern refrigerating devices have been working with environmentally compatible coolants known as hydrocarbons (HCs, or VHCs). The VFCs and VHCs are thermally released in the special, gastight recycling plants for refrigerating devices, then extracted and liquefied in downstream process air treatment plants so that they can be disposed of properly.

The new Electrical and Electronic Equipment Act obliges consumers to dispose of their old electrical equipment separately from other waste and refuse. When buying a new refrigerator, consumers can take advantage of the manufacturers' and sellers' take-back system. Dealers are obliged to take back the old refrigerator and dispose of it properly. In addition, refrigerating devices can easily be handed in at local recycling centres free of charge.

This website uses cookies. Those have two functions: On the one hand they are providing basic functionality for this website. On the other hand they allow us to improve our content for you by saving and analyzing anonymized user data. You can redraw your consent to using these cookies at any time. Find more information regarding cookies on our Data Protection Declaration and regarding us on the Imprint.